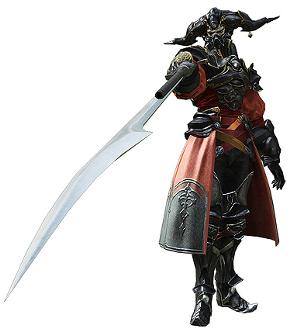 "An imposing man with a philosophy of might makes right, he wields a powerful machina canon and gunblade with dual purpose."

In the original title he was a powerful and well respected general from the Garlean Empire and sought to bring Eorzea under his heel, although undermanned he lead his XIVth Legion in hopes that his secret weapon the machina known as Ultima Weapon would allow him to claim victory for the empire. He met his end when he was defeated by the Bringer's of Light in the Praetorium after being duped by the Ascian, Lahabrea. A veteran warrior, master politician and cunning tactician, Gaius has many virtures that earned him his high rank and popularity as the paragon among the Garlean military .

In his normal form Gaius wears an intimidating suit of black armor over a long red coat and a horned helmet bearing a skull like visage and gas mask like breathers. In his EX Mode Gaius's armor and weapon take a gold sheen from the Aetherial powering his armor.

In his first alternate form Heavy Darksteel Armor Gaius wears a different black suit of armor based on the same named set from Final Fantasy XIV.

In his second alternate form Heavy Allagan Armor Gaius wears another suit of black armor based on the like named set from Final Fantasy XIV.

His Manikin is lilac and called the Wolf of Obsucurtiy.

Gaius is an Magitek Overlord who strikes swiftly and powerfully with his incredible magitek and machina weaponry, Gaius's arsenal can be charged at anytime increasing the lethality of his attacks. This charge is represented by a meter that fills with a blue bar when charged. When this meter is charged higher Gaius moves and attacks faster and his ATK points rise, however Gaius's Ceruleum meter is always decreasing at a slow and steady pace. When Gaius is charged his body and sword become engulfed by blue fire, the higher the meter the more fire.

When Gaius is faced in battle during story mode, Ultima plays as the default background music.

Community content is available under CC-BY-SA unless otherwise noted.
Advertisement